Silicon wafers are tiny electronic brains that are the basis for microchips. They are always very complex to design and manufacture, and are used in televisions, stereos, watches, cars, phones, traffic lights, nearly every appliance in a common, modern kitchen. If an appliance uses electricity, it’s probable that it uses a silicon wafer. The process took decades to perfect, and the finished product must be flawless. Current technologies make it possible for billions of transistors to operate on one wafer, and developments are progressing rapidly. Smaller, faster, and less expensive wafers are becoming a reality, and the technology will only improve.

How are wafers made?

A wafer is also known as a substrate or slice. It is a tiny slice of semiconductor material, and crystalline silicon is an excellent semiconductor. This term means that it can both block and conduct electricity. Silicon wafers take approximately two months to manufacture, and the process starts with product and engineering development. Teams of scientists and engineers work together to create the plans for the wafers, which consist of multiple layers of interlocked connections and circuits. These teams also check the progress of the chips as they are produced, and are constantly looking for ways to improve, streamline, and quicken the process.

After the connections and circuits have been planned and designed, the wafers themselves can be manufactured. Silicon wafers are made of a nearly pure, defect-free particular crystalline substantial, and they are consistently cleaned throughout the manufacturing to ensure that they stay defect free. 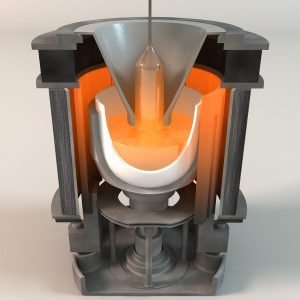 Most common electronics use wafers that are sized anywhere from 100mm in diameter to 450mm in diameter. The wafers sized at 450mm diameter are currently in production, but they are not already in general use.
Once the wafers have been formed, they can then go always on to the next of the approximate 1500 processing steps that are necessary to make a silicon chip. The wafer may undergo steps such as ion implementation, in which doping atoms are added. These can include boron, phosphorous, arsenic, or antimony. These are impurities that are intentionally added, and they are situated randomly throughout the structure of the silicon, but when treated with very high temperatures, the atoms align themselves in a set pattern throughout the silicon. These atoms provide a wide array of electrical characteristics in the finished chip and help the wafer become the base for layers of incorporated circuits and microelectronics. The wafers are polished and buffed first by machine, then by various chemicals, leaving a surface roughness of 1 millionth of a millimeter. The silicon wafers are then etched with the intended circuit design and are ready to continue on in the process.

The next step is normally the photolithographic patterning, in which light is used to transfer a geometric pattern from a photomask to a light-sensitive chemical that has been layered onto the wafer. It is a similar process to that of the production of photographs, in which in this case images are projected and chemicals are mostly being used to mask and develop areas that have been exposed to much light or even sunlight. This step places the pattern for each circuit onto the chip, and it can be completed hundreds of times. The layers of circuits are built up gradually, much in the same way that a 3D printer creates structures. Some producers use molten copper to create connections within the wafer, as it is an excellent conductor of electricity. This step always involves flooding the connections with copper, then sanding down the excess metal to isolate the connections. Up to this point, the wafers are manufactured as a mass, on a single large sheet. The wafers, which have already been treated together in sheets that can hold about 100 chips, are now separated into distinct microcircuits. This process is known as dicing.
The wafers are cleaned throughout the photolithographic process, but after separation, they have treated again with weak acids to overhaul damage initiated during the sawing process, and to remove undesirable particles. Even a single particle of dust is large enough to render a chip useless if it ends up within a connection. The wafers are also rough to create a rough surface to enhance their efficiency when used for solar cells. The phosphor silicate glass that’s generated is removed, in the etching, from the edge of the wafer.

The entire process is completed in Class 1 clean room that is thousands of times cleaner than an operating theater, and workers must use advanced electron microscopes to monitor the process.

The characteristics of the wafers and their manufacturing plants

Wafers are available in a wide array of different sizes, anywhere from 25.4mm, or one inch to 300mm, which is 11.8 inches. Semiconductor fabrication plants, also known as “fabs” are referred to by the thickness of wafers that they are going to yield. The thickness has slowly increased to decrease cost and increase throughput with the current fab using 300mm but soon hoping to adopt the 450 mm diameter wafer. Three separate companies are conducting research to implement the making of the 450mm prototype, though there are some serious hoops left to jump through. The three companies are Samsung, Intel, and TSMC. Silicon isn’t the only material used to make wafers but is definitely the most widely used. Scientists and engineers are consistently researching the properties of other materials, and there are hundreds of prototypes that do not utilize silicon. Wafers that are using different materials than silicon will most likely have a different thickness than that of one using silicon, which has the same diameter.

The thickness of the wafers is always determined by the automated strength of the materials used, which means the wafer should be thick enough so that it does not crack during handling. So as to reduce cost per die, producers want to exploit the number of dies made out of a single wafer. As a result of the limitation of wafer dicing, dies only contain a square or rectangular shape. That makes it a computationally intricate difficult without an analytical answer, which is dependent on both of their aspect ratios, square or even rectangular, and the capacity of the dies, along with other respects such as the space covered by alignment and text structures, and the scribe line size. Orientation is always very of great value since many of a single crystal’s mechanical and electronic things are anisotropic, making them directionally dependent. Ion establishment depths be subject to on the crystal orientation of the wafer because each direction provide unique paths for transport.

Dies only contain a square or rectangular shape. That makes it a computationally challenging problem without an analytical answer, which is dependent on both of their aspect ratios, square or even rectangular, and the range of the dies, along with other concerns like the space occupied by alignment and text structures, and the scribe line size. Orientation is always very significant as many of a single crystal’s mechanical and electronic properties are anisotropic, making them directionally dependent. Ion implantation depths be subject to on the crystal positioning of the wafer because each direction offers unique paths for transport. If the wafer is scored along the clea If the wafer is scored along the cleavage planes, this will allow it to be diced into individual dies, or chips, to enable the billions of single circuit elements on the average wafer may sometimes be separated into their own individual circuits. Each wafer includes 100 billion transistors on numerous levels, in a space no larger than a fingernail.

The history of silicon wafers and the integrated circuits

In the year 1949, a German engineer by the name Werner Jacobi filed a patent for a device that had five transistors on a common substrate. It had an early version of incorporated circuits as well as semiconductors, and when filing for a patent, Jacobi suggested hearing aids as a possible future use. His idea later became the electronic brain used not only in hearing aids but in nearly every electronic device and appliance used by humans. Interestingly, there is no evidence of his device being used for any commercial purpose. The integrated circuit itself was further to be developed by Geoffrey Dummer, who worked for the British Ministry of Defense then. He presented his idea at a symposium in the year 1952, cleadies only have a square or rectangular shape.

That makes it a computationally difficult situation without an analytical answer, which is dependent on both of their aspect ratios, square or rectangular, as well as the area of the dies, along with other concerns such as the space taken by alignment and text structures, and the scribe line size. Orientation is always very essential since most of a single crystal’s mechanical and electronic stuffs are anisotropic, making them directionally dependent. Ion implantation depths is influenced by on the crystal alignment of the wafer because each and every direction offers separate paths for transport. If the wafer is scored along clear but his attempts where he was aiming to build the circuit were unsuccessful, and he ceased his work a few years later. Later, Jack Kilby proposed his idea of small ceramic squares containing minuscule components to the US military, then began developing the integrated circuit that is closest to what we know today. He applied for the patent in 1958, and the technology was first utilized by the US Air Force. He won the Nobel Prize in Physics in 2000 for his invention of the integrated circuit, and he is considered the father of the modern silicon chip.

Silicon chips were first placed in use in the year 1960s, as advancements in semiconductor devices, and their fabrication, were made. They later gradually became more and more integral to consumer electronic goods production, and over decades, as they because cheaper and easier to more consistently produce, they have become ubiquitous in modern households and businesses. Compared to the chips of the 1970s, current chips have millions of times the capacity and thousands of times the speed. Silicon wafers are still being consistently improved as technology advances.

Silica is found in clay, rock, and sand, more than half of the Earth’s crust is composed of the material, though it is commonly present as silicon dioxide, commonly referred to as sand or quartz. It’s converted from silica to silicon through intensive heating. Silicon, or Si as it’s known on the periodic table, is a close relative of carbon. It’s usually bound to other elements, like oxygen, and the term “silicates” refers to rocks that contain bound silicon and oxygen. Silicon is the eighth most abundant element in the universe and is present in large stars. Silicon has been used for thousands of years but was officially discovered in 1824. It wasn’t until 1854 that silicon was isolated into crystals and purified. It has a crystalline form and is gray and metallic. It is similar to carbon in its arrangement of electrons.
For silicon to be used in electronics, it must be 99.9999999% pure; for every billion atoms, there can only be one that can be non-silicon. This process will always require intensive heating and testing but is also necessary to produce silicon wafers for electronic use.