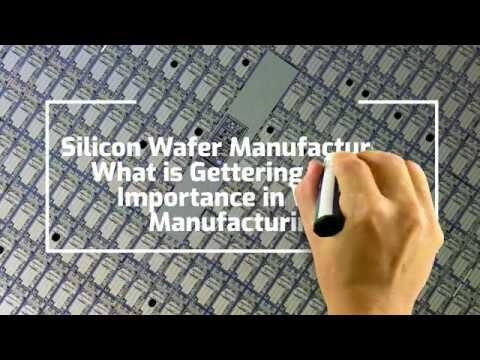 •    Releasing the gettered impurities into a solid solution no matter where the precipitate is from.

•    They tend to undergo the process of diffusion via the silicon.

•    They are usually trapped by some defects like precipitates or dislocations in some areas away from the device.

Gettering is classified into two types namely, intricate and extrinsic types. The extrinsic type of gettering has more to do with employing some external means creating stress in the silicon lattice, that way it will extend the defect needed to trap those impurities that are formed around the wafer backside area.

As for the external method of gettering, it requires sandblasting or grooving which had the ability to produce some magnitude of stresses at the backside area of the wafer. When this annealed creates dislocations, it tends to relieve those stresses on the wafer thereby serving as a gettering site. The main hindrance to this method is it’s a tendency to propagate and initiate wafer microcracks which may have been compromised by the mechanical power of the wafer.

Importance of Gettering to Wafer Manufacturing

1.    Gettering in wafer manufacturing is a powerful agent used in the removal of containments and another form of defects in wafer and conveys is it into the bulk, moves it away from the surface of the wafer, and have it trapped at the top.

2.    Getting can defect in a semiconductor wafer, a method that can be accomplished by stressing the back surface through inflicting damage on those materials which normally features different semiconductor thermal.

3.    The patterned getter materials are used in the packaging of microelectronics providing an ultra-high vacuum often located in a sealed hole.

4.    Because of the little amount of gas in the vacuum causes some unstable conduction, a situation that leads to major malfunctioning during the ionizing process. And also because some little of gas inside the insulated part of the vacuum can compromise the value of the whole system, the getter is now applied to the vacuum for sustenance.

In conclusion, you have to understand that the coated plate of the getter material is usually heated, when you use getters within a general wafer manufacturing system, i.e. semiconductor manufacturing, are introduced as whole new equipment in the vacuum chamber section. Some patterned, deposited materials are used during the microelectronics which is usually packaged to present a very high vacuum within a sealed hole. To facilitate the effectiveness of the pumping capacity, you must maximize the activation, but it must be by the limitation process. Finally, you must note that it is not advisable to avoid hitting hearing the getter when the whole system is not in a good vacuum.